I was lucky enough to have been born and raised in Montréal, when the city was in its prime.  I was a child during the 1960s and a teenager during the first three quarters of the 1970s. Whether we were anglophone or francophone, lived to the west of or to the east of Boulevard St-Laurent, politically “engagé” on the left or on the right ―  we all could agree on one thing:  what a vibrant, beautiful and culturally rich city we lived in!  A cornucopia of brilliant intellectuals, musicians, artists, doctors, architects, street entertainers, chefs, business owners, restaurants, cafés and bars.  The city boasted the best nightlife in all of Canada. The world fair (Expo ’67) in Montréal attracted people from every corner of the globe and oh, what a wonderful time we all had! And, over the years, one political drama after another kept everyone talking, debating, philosophizing and, yes, writing.

And at the city’s epicenter was journalist, politician, boulevardier (man about town)  and Montréalais extraordinaire ― Nick Auf der Maur (a man who was true to his surname – translated from Swiss to English as “Off the Wall”).

“Rather, Auf der Maur was simply a former downtown city councillor and Gazette columnist — not normally the stuff of legends. He was also a world-class boulevardier and tippler and indiscriminate butt-pincher with a penchant for Borsalino headwear, Donald Duck ties and stinky Gitane smokes. And he was a friend to so many from so many different walks, as well as being the go-to guy for those from outside Montreal who wanted the goods on the city...

… Most importantly, Auf der Maur embraced all of Montreal. He was one of the precious few anglos whose voice carried well beyond the Main. He had street cred among francos as well as anglos. As the late Liberal leader Claude Ryan once put it: he was the only anglo who could fill a hall east of St. Laurent Blvd, the city’s Mason-Dixon linguistic line to many.“

If Ernest Hemingway and Nick Auf der Maur had ever crossed paths, they would ― I am certain ― have become lifelong friends.

Alas, Nick’s life was cut short (by cancer) at the age of 55.  He didn’t live long, but he did live well.  His charisma, humour, kindness and mischievous twinkle captivated many.  His funeral service, held at St. Patrick’s Basilica (in Montréal), was standing room only with 3000+ people in attendance.

Nick died on this day, back in 1998. We remember him with a wistful smile and we raise a glass of our favorite spiritual concoction in his honour.

Yes, those were the days my friend. We thought they’d never end. 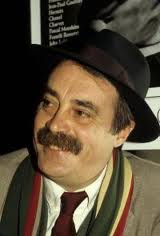 Click on these links (below), for more on Nick: