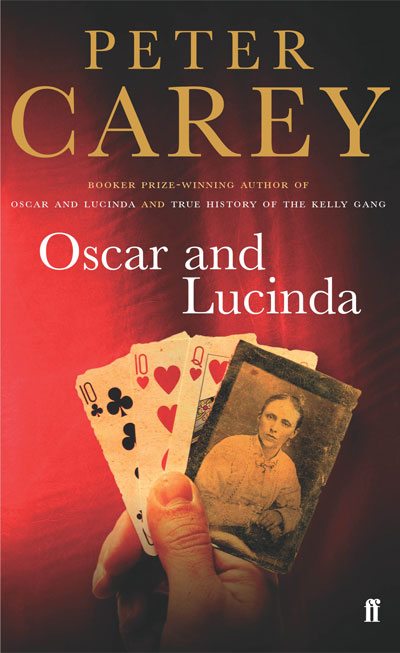 “She held out her hand, like a man. He hesitated, then took the hand and shook it. It was very warm. You could not help but be aware of the wild passage of blood on the other side of its wall, veins, capillaries, sweat glands, tiny factories in the throes of complicated manufacture. [He] looked at the eyes and, knowing how eyes worked, was astonished, not for the first time, at the infinite complexity of Creation, wondering how this thing, this instrument for seeing, could transmit so clearly its entreaty while at the same time—-Look, I am only an eye—-denying that it was doing anything of the sort.”

What better way to enjoy a summer weekend than to curl up in your favorite chair and read a love story?  Written by Australian author Peter Carey, Oscar and Lucinda is a satire about two star-crossed lovers in mid-nineteenth century England and Australia. Growing up in a strict, religious (Plymouth) household, the shy young man rejects his father’s religion in favor of the C of E (Church of England), and becomes an Anglican priest.  Lucinda is a headstrong Australian heiress who is a feminist before her time. She buys a glass factory, in the hope of one day building a church made from glass and transporting it (intact) to the Australian Outback. Oscar and Lucinda meet on a ship, en route to Australia and discover they share a common vice:  gambling  (he, the racetrack; she, a deck of cards). When they arrive in Australia, neither one fits well in their social circles and the two “outsiders” form a bond.  The wickedly witty gambling duo make a wager that unleashes a series of events that affects the course of their lives.  The wager?  Lucinda bets Oscar her entire inheritance that he would be incapable of transporting the glass cathedral (without any breakage or damage) to the Outback.

Told in a long flashback, this enchanting story is about two people who were truly meant to be together.  And we, the readers, fall in love with them – vices and all.

Other novels by Peter Carey:

* adapted into a film (1997, USA) by the same name; directed by Gillian Armstrong, and starring Ralph Fiennes (as Oscar) and Cate Blanchett (as Lucinda).