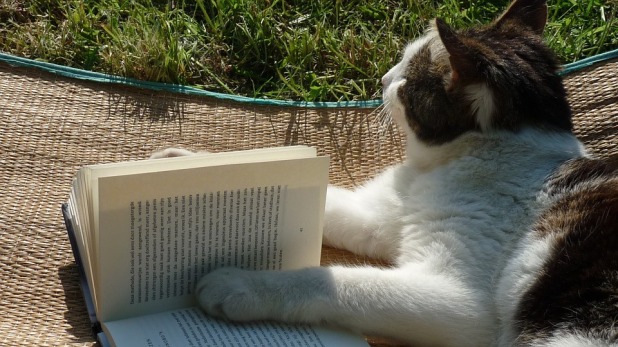 Summertime is that wonderful season when everything slows down just a tad. It’s when all the bookworms come out of the woodwork –– to grab that enticing novel, inspiring non-fiction or juicy biography that they finally have the time to read. Work attire is hurriedly replaced by t-shirts, shorts and flip-flops.  And with tall, ice-cold glasses of their favorite libation, they curl up comfortably and begin their summer reads.

These are my (heatherfromthegrove) top picks – all sitting on my bookshelf, waiting to be read. I just poured myself a glass of white wine and grabbed a book I’ve been dying to read: And the Weak Suffer What They Must? – by Yanis Varoufakis. Now, off to my comfy chair on the patio…

1. All the Birds in the Sky – by Charlie Jane Anders

“Patricia is a witch who can communicate with animals. Laurence is a mad scientist and inventor of the two-second time machine. As teenagers they gravitate towards one another, sharing in the horrors of growing up weird, but their lives take different paths…When they meet again as adults, Laurence is an engineering genius trying to save the world-and live up to his reputation-in near-future San Francisco. Meanwhile, Patricia is a graduate of Eltisley Maze, the hidden academy for the magically gifted, working hard to prove herself to her fellow magicians and secretly repair the earth’s ever growing ailments.As they attempt to save our future, Laurence and Patricia’s shared past pulls them back together. And though they come from different worlds, when they collide, the witch and the scientist will discover that maybe they understand each other better than anyone.”

2. The Man Without a Shadow – by Joyce Carol Oates

“In 1965, neuroscientist Margot Sharpe meets the attractive, charismatic Elihu Hoopes—the “man without a shadow”—whose devastated memory, unable to store new experiences or to retrieve the old, will make him the most famous and most studied amnesiac in history. Over the course of the next thirty years, Margot herself becomes famous for her experiments with E. H.—and inadvertently falls in love with him, despite the ethical ambiguity of their affair, and though he remains forever elusive and mysterious to her, haunted by mysteries of the past….”

3. They May Not Mean To, But They Do – by Cathleen Schine

A “hilarious new novel about aging, family, loneliness, and love.”

“The Bergman clan has always stuck together, growing as it incorporated in-laws, ex-in-laws, and same-sex spouses. But families don’t just grow, they grow old, and the clan’s matriarch, Joy, is not slipping into old age with the quiet grace her children, Molly and Daniel, would have wished. When Joy’s beloved husband dies, Molly and Daniel have no shortage of solutions for their mother’s loneliness and despair, but there is one challenge they did not count on: the reappearance of an ardent suitor from Joy’s college days. And they didn’t count on Joy herself, a mother suddenly as willful and rebellious as their own kids…”

“A wild, erotic novel—a daring debut—from the much-admired, award-winning poet, author of Flying Inland, A History of Yearning, and With Robert Lowell and His Circle: Sylvia Plath, Anne Sexton, Elizabeth Bishop, Stanley Kunitz, and Others. A strange, haunting novel about survival and love in all its forms; about sexual awakenings and dark secrets; about European refugee intellectuals who have fled Hitler’s armies with their dreams intact and who have come to an elusive new (American) “can do, will do” world they cannot seem to find. A novel steeped in surreal storytelling and beautiful music that transports its half-broken souls—and us—to another realm of the senses.”

“You can never know what goes on behind closed doors.

Kyung Cho is a young father burdened by a house he can t afford. For years, he and his wife, Gillian, have lived beyond their means. Now their debts and bad decisions are catching up with them, and Kyung is anxious for his family s future….

… As “Shelter” veers swiftly toward its startling conclusion, Jung Yun leads us through dark and violent territory, where, unexpectedly, the Chos discover hope. “Shelter” is a masterfully crafted debut novel that asks what it means to provide for one’s family and, in answer, delivers a story as riveting as it is profound.”

6. Evicted (Poverty and Profit in the American City) – by Matthew Desmond

“From Harvard sociologist and MacArthur “Genius” Matthew Desmond, a landmark work of scholarship and reportage that will forever change the way we look at poverty in America.”

“In this brilliant, heartbreaking book, Matthew Desmond takes us into the poorest neighborhoods of Milwaukee to tell the story of eight families on the edge. Arleen is a single mother trying to raise her two sons on the $20 a month she has left after paying for their rundown apartment. Scott is a gentle nurse consumed by a heroin addiction. Lamar, a man with no legs and a neighborhood full of boys to look after, tries to work his way out of debt. Vanetta participates in a botched stickup after her hours are cut. All are spending almost everything they have on rent, and all have fallen behind…”

7. The Book – by Keith Houston

“We may love books, but do we know what lies behind them? In The Book, Keith Houston reveals that the paper, ink, thread, glue, and board from which a book is made tell as rich a story as the words on its pages―of civilizations, empires, human ingenuity, and madness. In an invitingly tactile history of this 2,000-year-old medium, Houston follows the development of writing, printing, the art of illustrations, and binding to show how we have moved from cuneiform tablets and papyrus scrolls to the hardcovers and paperbacks of today. Sure to delight book lovers of all stripes with its lush, full-color illustrations, The Book gives us the momentous and surprising history behind humanity’s most important―and universal―information technology.”

“At the age of thirty-six, on the verge of completing a decade’s worth of training as a neurosurgeon, Paul Kalanithi was diagnosed with stage IV lung cancer. One day he was a doctor treating the dying, and the next he was a patient struggling to live. And just like that, the future he and his wife had imagined evaporated.

When Breath Becomes Air chronicles Kalanithi’s transformation from a naïve medical student “possessed,” as he wrote, “by the question of what, given that all organisms die, makes a virtuous and meaningful life” into a neurosurgeon at Stanford working in the brain, the most critical place for human identity, and finally into a patient and new father confronting his own mortality.”

“I guarantee that finishing this book and then forgetting about it is simply not an option. . . . Part of this book’s tremendous impact comes from the obvious fact that its author was such a brilliant polymath. And part comes from the way he conveys what happened to him—passionately working and striving, deferring gratification, waiting to live, learning to die—so well. None of it is maudlin. Nothing is exaggerated. As he wrote to a friend: ‘It’s just tragic enough and just imaginable enough.’ And just important enough to be unmissable.”— Janet Maslin, The New York Times

“To the charity workers, Dadaab refugee camp is a humanitarian crisis; to the Kenyan government, it is a ‘nursery for terrorists’; to the western media, it is a dangerous no-go area; but to its half a million residents, it is their last resort.”

“In City of Thorns, Rawlence interweaves the stories of nine individuals to show what life is like in the camp and to sketch the wider political forces that keep the refugees trapped there. Rawlence combines intimate storytelling with broad socio-political investigative journalism, doing for Dadaab what Katherinee Boo’s Behind the Beautiful Forevers did for the Mumbai slums. Lucid, vivid and illuminating, City of Thorns is an urgent human story with deep international repercussions, brought to life through the people who call Dadaab home.”

10. And the Weak Suffer What They Must? (Europe’s Crisis and America’s Economic Future) – by Yanis Varoufakis

“A titanic battle is being waged for Europe’s integrity and soul, with the forces of reason and humanism losing out to growing irrationality, authoritarianism, and malice, promoting inequality and austerity. The whole world has a stake in a victory for rationality, liberty, democracy, and humanism.”

“Varoufakis delivers a fresh look at the history of Europe’s crisis and America’s central role in it. He presents the ultimate case against austerity, proposing concrete policies for Europe that are necessary to address its crisis and avert contagion to America, China, and the rest of the world. With passionate, informative, and at times humorous prose, he warns that the implosion of an admittedly crisis–ridden and deeply irrational European monetary union should, and can, be avoided at all cost.”

Cat and Book photos via pixabay.com.