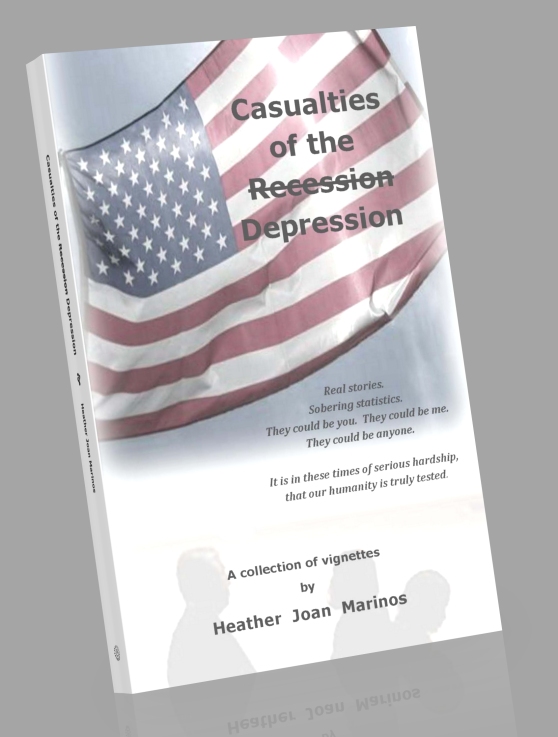 I am pleased to announce the release of my new book,

Casualties of the (Recession) Depression.

Once again, from the back cover:

“Has economic activity returned to close to normal levels?”

Did the “Great Recession” really end in June 2009?

Is the American economy in a recession, a depression, or on the road to recovery?

Do our political leaders and economists truly believe what they’re saying, or are they deluging us with “feel-good” marketing rhetoric?

In her own evocative and  mince-no-words style,  Heather Joan Marinos argues that American economic activity has not returned to close to normal levels.

Through a writer’s lens, we catch a glimpse of some of the poignant moments in the lives of the people most affected by this economic downturn ― the middle class.  Marinos takes the reader on an American odyssey from 2006 to the present day, through a collection of vignettes and scenes, and some passionate commentary along the way.

It is, after all, the people who tell the real story of our economy.  Their challenges and triumphs are not rhetoric. Their resilience and humanity is what gives us hope for a prosperous and triumphant future.

I am also in the process of completing DEMOKRATIA IN ACTION, due out in 2014.